Novak Djokovic has spent most of the last four years as the world’s No. 1 ranked tennis player, but he is not necessarily the people’s champion. Having finally overtaken the affable, urbane superstar Roger Federer and his longtime foil, Rafael Nadal (a popular underdog), Mr. Djokovic knows the crowd is not always on his side. But that has only steeled his resolve.

During the Rogers Cup tournament in Montreal last month, he stepped into an empty space adjacent to the media room at the Uniprix Stadium complex in Jarry Park. He was flanked by his agent Elena Cappellaro and a publicist for the ATP tour. For a 6-foot-2 elite athlete, Mr. Djokovic seemed startlingly slight.

In his 2013 book, “Serve to Win,” he wrote of dropping from 182 pounds to 172 in the wake of switching to a gluten-free diet, causing his family and friends to worry he was becoming too skinny. But far from seeming fragile when you see him up close, Mr. Djokovic projects strength and sturdiness. When he sat down, his posture was perfect.

“At the beginning of my career,” said Mr. Djokovic, 28, “I was observed as a rebel, somebody who comes in the mix and starts to challenge the two guys that were so dominant. ‘Who is this guy from Serbia, small country, comes from nowhere and starts saying he can beat the top guys and become No. 1?’ Obviously, I understand the people’s reaction to that, but I felt that the only way for me to get out there was to show that I deserved to be there.”

Mr. Djokovic, who wore white snug-fitting, knee-length tennis shorts and a tangerine top by his clothing sponsor, Uniqlo, was careful to note that he never “disrespected” the sport or his rivals. “I try to praise, to understand, because we are more or less in the same situation,” he said. “Because of Nadal and Federer, I became a better player, and I became who I am today. But I had to earn it, and I still have to earn it. I’m still not at, I guess, the level of appreciation of Nadal and Federer — and deservedly so for them, because they have been so dominant.”

Mr. Djokovic, who entered the United States Open as the top seed, had just put himself through a strenuous practice session in the broiling heat, and there was a trace of weariness in his voice.

“They are champions on and off the court,” he said, still speaking of Mr. Federer and Mr. Nadal. “But that motivates me even more to keep going.” 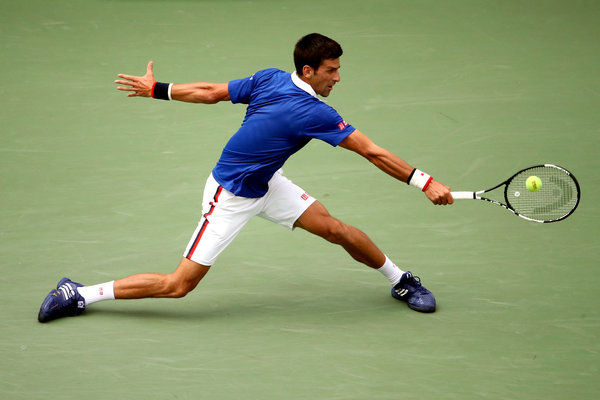 The notion that champions are born and not made does not apply to Mr. Djokovic, who follows a strict regimen (diet, exercise, yoga and meditation) designed to keep him strong enough to withstand fickle crowds and the complacency that can knock a No. 1 off his perch.

When he came onto the scene in 2006, he was regarded as a talented but vexing player who was known less for his game than for taking supposedly unwarranted medical timeouts to treat phantom ailments. More memorable than his matches were the antics of his alter ego, “the Djoker,” who performed uncanny impersonations of other players’ idiosyncrasies (the shuffle-step of Maria Sharapova, the underpants adjustments of Mr. Nadal).

After a switch to a gluten-free diet in 2010, Mr. Djokovic found a new gear, closing out the season by leading Serbia to its first Davis Cup title; and his 2011 season was one of the most dominant in the history of modern tennis. Since then, he has won eight more Grand Slam championships.

“The gluten-free diet was the highlight in many journalists’ articles about me for a long time, emphasizing that particular aspect of my life as being the biggest secret of my success, which it isn’t,” Mr. Djokovic said. “It is a big change that helped me to become better, but it is not that suddenly I started winning all the matches because I was gluten-free.”

He travels with a large team that often includes his coaches Marian Vajda and Boris Becker, his trainers Miljan Amanovic and Gebhard Phil-Gritsch and his manager-agents Edoardo Artaldi and Ms. Cappellaro. (He was accompanied in 2011 by the Serbian diet doctor and acupuncturist Igor Cetojevic, who diagnosed his gluten intolerance.)

Heading into the United States Open, Mr. Djokovic had a record of 56 wins and 5 losses in 2015 matches. He has reached the finals of three Grand Slam tournaments along the way, winning two, and could have the most lucrative year in the tour’s history.

Perhaps the most important ingredient to his success, he said, is attitude. Describing his mental approach, he sounded at times more like a self-help guru than an athlete.

“I like to be in the creative spirit all the time,” Mr. Djokovic said. “I think you either progress or regress, so it’s either going up or down. Everybody is moving, the people, our planet, so you either keep up with it or you just stay where you are. But staying where you are, you actually regress.” 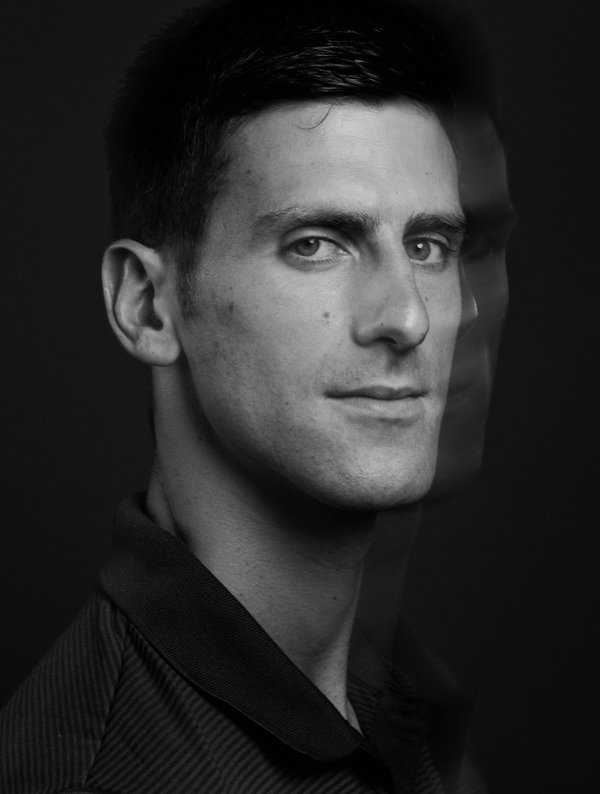 The lack of any discernible weakness may be his greatest strength. Mr. Djokovic wins by grinding down opponents and breaking their wills, and a strong mental game is especially important for such a player. During the interview, he cited meditation as a key tool, and it has been reported that he visited a Buddhist temple in Wimbledon during the tournament there.

His particular mental workout is not meant as an escape from everyday troubles, he said.

“One of the ways is to kind of meditate, but not meditate with the intention of going away from those problems, but visualize,” Mr. Djokovic said. “Visualization is a big part of everybody’s life, not just athletes’, but everybody. I strongly believe in visualization. I believe that there is a law of attraction: You get the things that you produce in your thoughts. Life just works that way.”

Another factor is how he presents himself on the court. “When I was growing up, I did have a lot of sports jerseys from different sports,” he said. “I loved Michael Jordan and Pete Sampras, and I tried to copy those guys, but Andre Agassi’s on-court style is unique, so I did have a lot of colorful clothes in my closet.”

He recalled that he always cared how he looked on court. “If you feel good in your clothes,” he said, “it affects you psychologically somehow, whether players admit it or not.”

He counts as a major influence the tennis coach Jelena Gencic, who encouraged Mr. Djokovic, in his youth, to listen to classical music and read Aleksandr Pushkin. “Tennis lessons and life lessons became one,” Mr. Djokovic wrote in “Serve to Win.”

In addition to pursuing cultural interests, he studies languages. He said he speaks German, French, Italian, Serbian, Croatian, Bosnian, Macedonian and Montenegrin, and is working on Spanish and Chinese.

Mr. Djokovic does not subscribe to the idea that domestic life can impede athletic success. After his Wimbledon victory this year, Mr. Djokovic, who married his longtime girlfriend, Jelena Ristic, in 2014, said, “I suggest that to every player: Get married, have kids, let’s enjoy this.” He and his wife have a baby son, Stefan.

According to Bill Scanlon, a former pro and author of “Zen Tennis: Playing in the Zone,” Mr. Djokovic’s mental work has paid off. “People are going to start to accept the fact that you can improve your competitiveness and your concentration skills,” Mr. Scanlon said, “and I know that Djokovic is doing this.”

But even with the strict diet and the meditation, Mr. Djokovic is far from nirvana. “There are days when I throw the racket on the court, where I scream or shout or I get in a fight with my wife,” he said. “Those days exist, and anyone who says those days won’t exist if you do these particular exercises is lying.”

Send this to friend